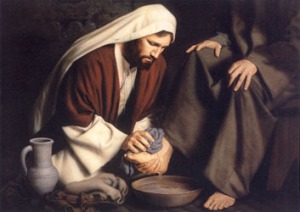 In the age of giant egos and “bigger is better” pop culture idolatry, it seems many evangelicals are biting into the same rotten apple as those who do not know Christ. The pride of man is always prodding individuals to become the big chief, head honcho or chief executive. The flesh loves to embrace the chief mentality… it makes us feel important without brokenness and powerful without the Holy Spirit. It must go to the cross and be put to death! (Rom. 6:11, Eph. 4:22, Col. 3:5)

Few things are as putrid to mature believers as the rock star promotion of so-called leaders. You’ve seen them…we all have. From the sickening ‘change the color of your hair every week peach fuzz prophets’ and the effeminate ‘gospel with a grin stage productions,’ to the uncouth ‘shock jock pulpit yuppies.’ Nothing new, every generation has them because the flesh loves to idolize and project itself through heros, even spiritual heros. However, when we as the church adopt it, it makes a mockery of the true message of Grace and Humility. Everything from book tours to church planting have become the latest fads for men to lift themselves, or allow others to lift them, to the status of idols.

Big impact is great…but not when it creates Big Egos! The big egos created by big impact causes the contradiction between the message and the messenger, and undermines the genuine power of the message. How do we pray for big impact and, at the same time, protect ourselves from the devilish idolatry of building fleshly role models? I believe the Lord is broken and sick over the state of the pulpit, from the wild eyed egomaniacs and religious comics, to the grungy dressed ‘let me prove I’m hip’ foolishness.

What if we thought small…small of ourselves, small of our importance, small of our talents, small of our liberties, BUT large of the Cross! Most modern church planting movements are creating churches who focus on the silly, insignificant and fleshy, while ignoring the call to holiness, brokenness over sin, and true personal humility. The result is going to be a mammoth crash of the personal lives of the leaders and parishioners. The years to come will reveal this.

Our only hope is for genuine leaders to arise, who are called by God and not by the lust of seeking importance or fame. Men who realize, in the core of their being, what Jesus meant when he said, “without me, you can do nothing.” (Jn. 15:5) Men, like Paul and Barnabas, who vomit at the thought of idol status, and who will run among the crowds rebuking them for attempting it. (Acts 14:12-15) Men, whose only tour is not a book signing or speaking engagement, but a tour from jail to jail for standing for the truth in unreached areas. (Acts 12:1-5, 16:25, 24:27, Eph. 3:1, Philemon 1:1)

Yes…we need men who think small and live small. Men who sacrifice for others instead of living as a king from the dainties of their popularity. I see few of these, but I’m confident God is raising some men up who will choose to shepherd and plant churches where there will be no financial gain….only eternal treasure for the glory of God.

Rid us, O Lord, of the rock star status among those in the pulpits. And open the eyes of your children, so they may see this deceptive and destructive attitude in the land. Lead them to support and work with those who seek to decrease so that the Christ crucified may increase! For Your Name’s sake…Amen.

Related Topics:
Where Are The Prophets?
What Kind of Leaders Are We Creating?
Preaching Without Power

One thought on “Really Want to Help?…Think Small”