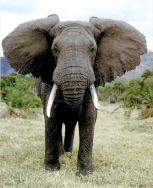 For the first time in history a political party in the United States has adopted a platform which shakes its fist in the face of God. The term ‘God’ has been officially left out of the National Democratic Platform.* However, there is an Elephant in the room…and it is not a Republican. As the DNC turns its back on God and the Judea-Christian base for our democracy, the democrats find themselves not just at odds with Republicans, but at odds with God.

The DNC stands arrogantly in support of the murder of the unborn and the immoral marriage of homosexuals. It is impossible to think of a convention moving any further away from Christianity than this. Yes, there is an elephant in the room who is being ignored and insulted at the DNC. It is God and His Word.

So, when you meet someone who ‘claims to be a Christian’ while supporting the Obama administration and the DNC, ask them this simple question:

How can you really love Jesus Christ and His Word and vote to support the murder of the unborn and the marriage of homosexuals?

Watch them squirm and dodge, and then let us weep for the sad state of their soul.

Those who support the national platform of the DNC, either by financial means or in the voting booth, are guilty of supporting murder and immorality and will find God as their enemy. So forget about singing “It is Well with my soul” with all your pomp, pageantry and religious hypocrisy. You’ve already revealed that Satan is your master and that truth doesn’t matter.

I’m neither a Democrat or Republican. I am an independent who looks at each candidate and decides based upon the person and their convictions whether they qualify for public office. This determination is based upon Christian and god-fearing principles, and not ethnicity or political party.

I’m not sold out to or concerned with being politically correct. My allegiance is higher than that. My concern is not what the ungodly, the atheist or the secularist decides. I’m concerned with the actions performed by those who ‘claim’ to belong to Christ. And because of that, I must proclaim that those who ‘say’ they belong to Christ, but vote for any candidate who stands for the murder of the unborn and homosexual marriage, needs to repent of shaking their fist in the face of the One they say they love.

God is the elephant you are ignoring!

*After writing this post the delegates at the DNC amended the platform to put the term ‘God’ back into it. Nothing more than an attempt at damage control.