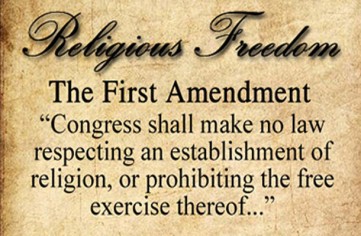 The political landscape in America has been going through a major shift for many years. As God is squeezed out of the inclusion in serious debate, man is left with only secular and naturalist input to attempt to solve major issues. Hence, the hot debate over what to do with Islam in America is one such debate that rages like a blazing fire. Wisdom from godly counsel could be gained if our leaders would seek out understanding of the issues instead of just looking for another talking point to up their standing in the political polls.

Our Constitution was written by men who understood religious persecution. They did not desire to ‘kick God out’ of the public arena. Instead, they wanted to protect religious liberty in the market square. Today, most politicians, especially liberals, want to exclude God from a place at the table of ideas. And most conservatives want to invoke Him and claim to speak for Him, while many times failing to have an understanding of sound Christian Theology. Therefore, the options of policy offered by our leaders usually vacillates somewhere between over-simplistic and foolish, to outright ridiculous.

The BIG mantra we here these days concerning how to stem the growth of Islamic terror in our Country is that “We are a people of religious freedom. There must be no test of faith for someone immigrating to America.” This sounds good, at least in most of the previous generations. (I say most because today’s generation fail to realize the strict measures our country took to protect our land from other potential threats. e.g. Japanese during WWII and Iranians during the Iranian crisis of the Jimmy Carter administration.)

What about today? Are we offering viable options by shouting out, “Freedom of Religion” or “No religious test for immigrants”? These banners are over-simplistic and do not offer real life solutions to the threat of Islamic Jihadists.

Take a moment and consider a few important issues about Islam:

So much more could be discussed. But let’s get to some of the questions that must be addressed in order to make a wise decision concerning Islam and Muslims in this country.

The vetting process for Muslims must be thorough…and it MUST involve questions about the type of Islam a person follows, from the violent passages in the Quran to Sharia Law. If we fail here, we are only blowing hot air and failing to see the heart of the issue. We can not hide behind “No test of Faith” for immigrants. It sounds patriotic, but in this day and age, we walk a fine line between security and liberty. And if we don’t include security, there will be no liberty to defend!

As Christians, we are called to proclaim the gospel to all men. That includes Muslims. We must not view all Muslims, especially those in Western countries as jihadists. Most of the Islamic terrorists come from Middle Eastern countries and are of the Sunni branch. Most Muslims born in the West love the freedoms we hold so dear. Of course, like anyone from any background, violence lies in the nature of all men. However, most Americans do not hold to a religion that is inherently violent toward others…and that is the main difference.

We must get beyond cute labels and banners. Proclaiming “Freedom of Religion” or “We must love everybody” will not answer the questions. We must demand substance and full consideration of the issues. The choices will not be easy. Many of them will not be popular. However, we can fulfill the great commission and be wise at the same time.

The Apostle Paul fled from a death sentence by escaping through the walls of Damascus. The early believers fled the persecution while Saul ravaged the Church. Using wisdom to escape terror is not an act of faithlessness. Sometimes it is an act of wisdom. We must not confuse the two!

For our political leaders, let us pray they seek wisdom in standing for “Freedom of Religion…but NOT Freedom to kill.”